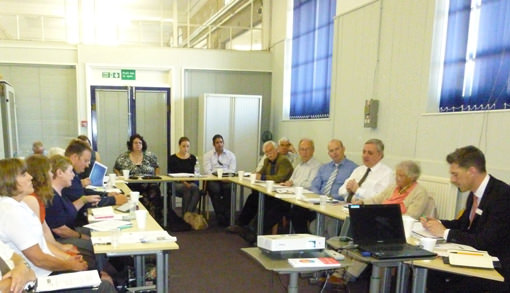 As part of Citizens’ Rail, the Riviera Line Community Forum was created to identify issues of concern and to agree work and project priorities. The Forum brings together organisations including local authorities, the health service, rail user groups and other community groups. It got off to a flying start with over 30 organisations represented at the first three meetings in April, June and November 2014.

The Forum continues to meet two to three times per year. To find out more, please email our lead partner DCRP or call the Devon and Cornwall Rail Partnership on 01752 584777.

A taster of the discussions

At the first meeting in April 2014, Dan Okey, Regional Development Manager for First Great Western, gave a presentation which included:

Lively workshops collected ideas and feedback on the themes of station and service improvements in the Exeter to Newton Abbot and in the Torbay areas, and on marketing The Riviera Line.

The second meeting in June 2014 included presentations from Celia Minoughan from the Devon and Cornwall Rail Partnership on summer marketing initiatives and involving the community at stations, and from Tim Maddocks, Customer Service Manager from Network Rail, who gave an update on work at Dawlish including the sea wall. Station improvement plans for Dawlish, Exeter St Thomas and Torre were presented for feedback.