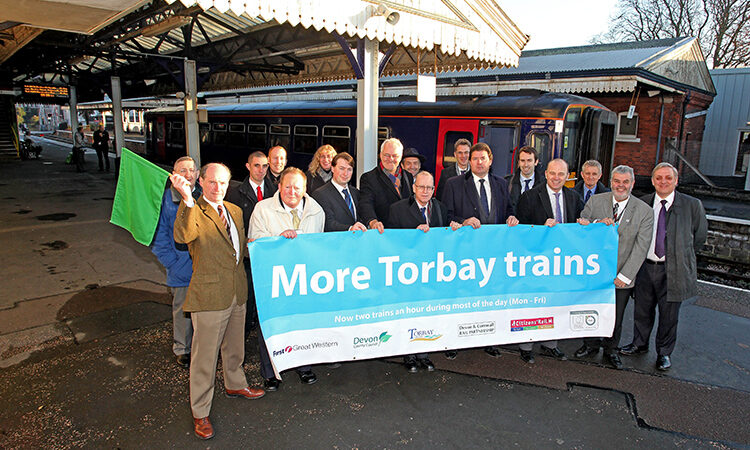 South Devon residents and visitors are being encouraged to try the train following the launch of more frequent services between Newton Abbot, Torre, Torquay and Paignton.

The new timetable means that there are at least two trains per hour throughout most of the day. The new services will provide more connections at Newton Abbot with main line trains to and from Exeter, Plymouth, Bristol and London.

The improved service is thanks to Citizens’ Rail – the EU Interreg IVB project to develop local and regional railways in the UK, France, Germany and the Netherlands. Along with the extra trains, the project will also see improvements made to stations on the Riviera Line between Paignton and Exeter, a major marketing campaign, work to involve the community in the line and a new officer employed at the Devon and Cornwall Rail Partnership to coordinate activities.

Local partners in the project – which is 50% funded by the Interreg IVB programme – include Devon County Council, Torbay Council, First Great Western, Plymouth University and the Devon and Cornwall Rail Partnership.

To celebrate the European involvement, on Monday 9th December, passengers between Newton Abbot and Paignton were treated to complimentary French, German and Dutch lunchtime snacks on board, including pains au raisins, German gingerbread and Dutch waffles (see photos from the goodie giveaway).

Speaking on behalf of First Great Western, Bid Director Matthew Golton said:
“First Great Western is committed to supporting the communities we serve, and delighted to be part of Citizens’ Rail. The additional services will make using the train much more attractive during the week, with fares providing good value when compared with the price of driving and parking.”

Cllr Andrew Leadbetter, Devon County Council Cabinet Member for Economy and Growth, said:
“The improved services are starting at the perfect time to boost local shops in the run-up to Christmas. Looking further ahead, as more and more people take the train we hope that services can continue to be developed to meet our aim of two trains an hour between Exeter and Paignton. Working in partnership is the best way to make this happen.”

Torbay Council’s Executive Lead for Highways, Transport and Environment, Cllr Ray Hill, said:
“We welcome this exciting step forward for Torbay’s railway, the Riviera Line. The additional services complement the work already undertaken between Torbay Council, Network Rail and First Great Western to improve the appearance of our stations. Having frequent and reliable public transport is vital to making Torbay an even better place to live, work and to come and visit.”

Torbay MP Adrian Sanders said:
“This is an important project for Torbay’s residents and visitors alike, and one which I was very pleased to help launch at the Houses of Parliament. It is excellent to see the additional trains about to begin, delivering a welcome boost to the local economy in the run-up to Christmas. As passenger numbers grow, I hope this can be the springboard for further improvements to the service in the years to come.”

Get the new timetable, enter a draw to win a pair of First Class tickets to London and find out more about the project at www.citizensrail.org/devon.