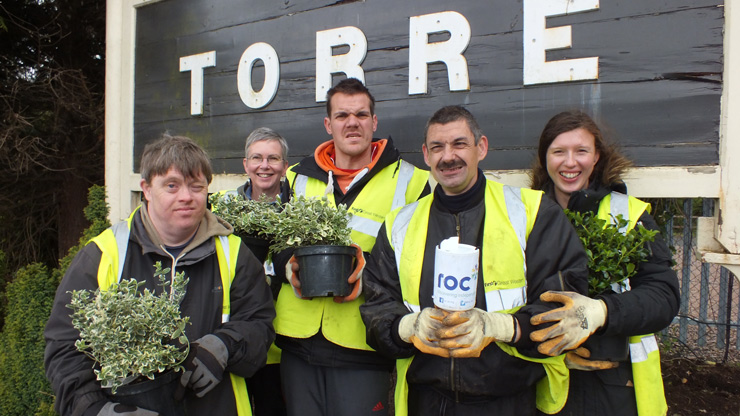 Following the community-led green revamps of Torquay, Dawlish and Teignmouth stations, Torre is set to be next on the Riviera Line to be brightened up.

The gardening team from Robert Owen Communities’ Railway Project, who have already worked wonders at Torquay station, have been making preparations to transform the station border on the upside platform using herbs and other shrubs with a sensory appeal. The work is being supported by funding from Citizens’ Rail and will complement the station’s new shelter.

As Robert Owen Communities (ROC) celebrates its 25th anniversary, the Railway Project is a key part of its Work2Work initiative, in which the person with the learning disability is thoroughly prepared for the world of work.

Chris, one of the people supported by the project, said: “I do a paid cleaning job three times each week at ROC Aspects. I like set tasks and can work independently. I love the Railway Project and am really looking forward to working at Torre.”

ROC’s Jessica Allan said: “The Railway Project is a great place for the people we support to make new friends, learn about gardening and work and stay fit in a safe and fun environment. This new project excites us because we can help bring about the same transformation as we have at Torquay station.”

Celia Minoughan, Citizens’ Rail Riviera Line Officer, added: “I am delighted that the ROC Railway Adoption project has made such a great start to the transformation of the garden at Torre Station. ROC has exciting plans for brightening up the platform border.”

Ian Mundy, station manager for First Great Western said: “Working in partnership with ROC and DCRP is proving to be a most worthwhile project. Not only does it provide valuable life and work skills for the people ROC supports, it’s transforming a previously unloved station into a welcoming and bright location for our customers.”

In other developments, there are also green plans for Exeter St Thomas station – more news soon!